Be Curious. Be Brave. Laugh A Lot. 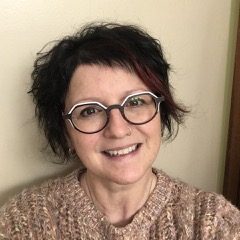 Sasha is a first-generation Canadian from Croatian descent born and raised in Winnipeg, Manitoba. Curious by nature, she has an academic career spanning subjects such as architecture, fine arts, dance, elementary education, pilates, yoga, and English as a Second Language (ESL). Her path has not been direct and will never be finished. She is a life-long learner and global nomad.

In her youth, Sasha was an active member of the arts community in Winnipeg. She has worked as a video artist, photographer, and Stott Pilates instructor. Her videos and photography have been shown across Canada and Europe. She has won a number of art grants, one of which changed the direction of her life.

After collecting video footage in Spain, Sasha returned to Canada and decided to sell all of her belongings and move to southern Spain to pursue flamenco dance. Clearly, Sasha is not afraid to take chances and make miss-takes! (See the clapperboard in our Twisted Process!) Her curiosity has led her to experiences such as ten days of silence in a Thai monastery, living in a small village in India while seeking a yogi, watching giant sea turtles mate on the beaches of Oman, seeing Ethiopia’s countryside by microbus, and photographing all of Gaudi’s architectural wonders in Barcelona. These are just a few of Sasha’s international experiences, and she’s happy to tell you about them! It’s important to note that before traveling around the world, Sasha made sure to see most of Canada, some by train, which she strongly encourages others to do.

Sasha’s interest in education was sparked in Spain where she and another Canadian ex-pat started giving English classes in their home. She decided to get her Teaching English to Speakers of Other Languages (TESOL) certificate and worked as an ESL instructor in Japan and Thailand. Her passion for teaching was confirmed and she returned to Canada to get her post-Baccalaureate Education degree at Vancouver Island University.

Sasha’s wanderlust got the better of her and she ended up teaching in El Salvador, Egypt, and Ecuador. To date, she has more than four years of ESL teaching experience and over eight years as an elementary school teacher. Sasha encourages her students to pursue their passions as she has done (See the litmus strip in our Twisted Process!), and she instills them with a sense of “I can do it!” no matter how ambitious or humble their goals. (See the target in our Twisted Process!)

While in Ecuador, Sasha became a Destination Imagination coach. It was an incredibly rewarding experience and one worthy of repeating, and she now applies her experience to her Twisted Tutoring. Now back in Canada, Sasha has returned to university to officially finish up her art degree – a goal she never expected she would have the opportunity to do. Isn’t life great?!

ps=You can also catch Sasha on our YouTube channel reading A Wrinkle in Time!

Favourite Movies:
The Rocky Horror Picture Show, The Trip to Italy, What Dreams May Come, Rise of the Guardians, Minions, The Incredibles

Sasha is ready to get Twisted in the following areas:

In Sasha's own words:"The Twist comes into play when students are listened to and educators then can help them achieve whatever goal they have. This causes learning to be enjoyable, engaging and relevant and not just feel like a required task!"