Education...Opening Doors to Your Future! 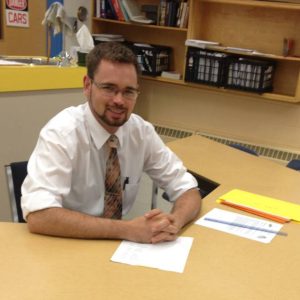 Robert was born in Ladysmith, spent his early years in Nanaimo before moving to Duncan. His father was a logger so Robert spent much of his free time in the bush hiking, quading, fishing and camping. When not in the bush, he enjoyed reading, playing computer games and programming, basketball, and writing.

Upon graduation, Robert started his post secondary career at Vancouver Island University (VIU — which was then called Malaspina University College) before transferring to the University of Saskatchewan. He completed his Science Degrees in Saskatchewan.

In the later years of university, he joined the Canadian Forces Reserve as a Medic to explore a possible career in medicine.

In 2011, Robert completed his education degree and began teaching in a small community in Saskatchewan. For six years he taught Physics, Chemistry, Biology and some of the higher-level math courses such as Calculus. When not teaching, he coached the Sr. Boys basketball team, mentored a robotics group, and supported the outdoor education program.

In 2017, he wanted to return to BC and was hired by the Central Okanagan school district where he taught Chemistry and Math.

Finally, in 2019 Robert made the move home and returned to Nanaimo where he works as a substitute teacher. Robert enjoys teaching and uses his unique experiences and background to teach by way of examples. Robert believes the best way to learn a new concept is by understanding how that concept is applied in the real world.

Robert is doing his Twisted thing with the following subjects/areas:

Is Rob the right fit for your child or for you? We’d love to talk this important decision through with you. If you don’t see a subject that you need tutoring for, please call us at: 1-866-977-4433, check out the full list of Subjects we tutor in,  or  fill out our detailed form online.

In Robert's own words:“The Twist is about teaching students as part of a conversation, rather than a transmission of information. It is important for students to learn certain key concepts; but as students are individuals, they will approach these concepts in different ways. The Twist is about letting students express their understanding in a way which makes sense to that student. Using ideas and experiences unique to the students to help connect a student to a concept. This is best accomplished by building a relationship with a student, so there can be a free flow of information between tutor (teacher) and student. This process allows the student to expand from their own frame of reference to access their next lessons and concepts. Let’s open some doors to your future...today!"

We had previously avoided tutoring due to the potential costs, but decided that our 16-year old son needed help with organization, time management and prioritization before it was too late. Leaving it…

We engaged a tutor to help with physics and pre-calculus. In our case it was a matter of helping review material that was being covered very quickly at school. We needed things to be explained more fu…

I’ve already recommended Tutoring…With A Twist to my friends because I can my Twisted Tutor really knows what she’s doing. In our first session, she taught me how to understand BEDMAS! Then, as …

The Twisted Tutor develop a math dictionary for me. In all my years of school, a teacher had never explained the use of such a tool. It helped a lot because I didn’t always feel dependent on the tea…

Tutoring…With A Twist is awesome!! So needed in our society, where more families feel the need to home-school. I REALLY appreciate your business, your service and the positive manner that you deal w…

When we approached Tutoring With A Twist, it was to find help for our son who was struggling with both high school Math and English. We had investigated other tutoring agencies but felt they didn’t …