We Will Figure This Out...Together! 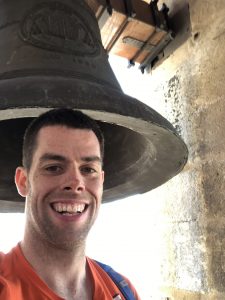 Born in North Bay Ontario, Ellis never stayed in one place for a long time. He moved from Canada to Australia to the United States and back to Canada throughout his formative years. In university, he developed an interest in computer science, resulting in him transplanting to Silicon Valley to work for Nvidia corporation, a multinational technology company. While simultaneously cultivating his engineering abilities, he also developed an affinity for mentoring younger employees, which eventually led him to seek to start anew in the education field.
Ellis has volunteered a significant amount of time throughout his life at the Open Door Homeless shelter in Atlanta, the Martin De Porres Soup Kitchen in San Francisco, and the Second Harvest Food Bank. These endeavors have allowed him to indulge his passion for meeting and working with new people in community projects (as well as lifting heavy boxes!). When not programming and volunteering, he spends his free time surfing and learning computer graphics.
Ellis has enjoyed teaching from his experiences in Silicon Valley as well as volunteer tutoring in the BreakThrough Silicon Valley Organization in San Jose. We welcome him bringing this passion to Tutoring…With A Twist and then, beyond into his pursuit of his Masters of Education!
VAK Score
Ellis’ Favourites Things!
Favorite Movie
Rec (2007)
Favourite Book
Catch 22 by Joseph Heller
Favourite Quote
“Reality is that which when you stop believing it, doesn’t go away” – Phillip Dick
Favourite Video Game
Half Life 2
He’d like to get Twisted in the following subjects:

In Ellis's own words:"In wanting to work for Tutoring...With A Twist, the word that stuck out to me on the website was 'collaborative'. From my personal experience with tutoring, and from second-hand stories from other tutors, there typically isn’t a lot of collaboration. A time is scheduled, the student and teacher meet up to tackle questions, and then they go home … only to repeat the process next week. A collaborative approach allows tutors to work as a team and with the students to refine our processes to better serve the varying students’ needs. I was fortunate to find Tutoring...With A Twist practices the art of collaboration!"