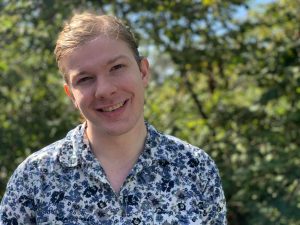 Jesse T. Johnson is a graduate from the University of Victoria’s Masters Program in Math. Before that, he graduated from Oregon State with a Bachelors in Mathematics. To say that Jesse “kind of” likes Math would be an understatement!

Throughout his educational journey, he has been successfully tutoring students from elementary school to university in Math, Statistics, and Physics. In speaking to the parents of students he has tutored, there is a dominant common theme: Jesse helps every student to see Math as a possibility. (See the heart in our Twisted Process.) He had students that came to tutoring with the thought that math wasn’t for them—they saw it only as something they had to get through. By the end of his time with them, Jesse was able to help them not only gain confidence, but also find enjoyment in math (smiley face).

Alongside his regular research, Jesse is now tutoring full time, and he is excited to help you see Math as a possibility! He brings a unique approach to learning, influenced by his specialization in helping students with ADHD and autism. His passion (see litmus strip in our Twisted Process) for Math shines through in his tutoring, and it’s truly contagious!

In his free time, Jesse is a concert marimbist, drummer, and composer. He was asked to accompany the Royal Canadian Navy band with his own solo. He also enjoys sewing, watercolours, and hiking. Just ask him to see one of his creations!

ps=You can also catch Jesse on our YouTube channel reading Frankenstein and Journey to the Centre of the Earth. He also has some fun Math videos!

Favourite Books:
Thinking, Fast and Slow by Daniel Kahneman, The Lord of the Rings Trilogy

Jesse specializes in Twistedly Tutoring in the following areas:

In Jesse's own words:"The Twist means teaching to a student's strengths, rather than trying to apply a rigid one-size-fits-all teaching method. It also means recognizing that understanding material and enjoying learning is more important than simply finding a correct answer."